Australia Awards alumnus Dr Abdul Hannan Waheed is making positive contributions to higher education quality assurance and journalism in the Maldives. He credits his educational experience in Australia with having influenced many of his achievements.

Having always been fascinated by Australia, it was Hannan’s dream to study and live there. He was also keen on studying for a PhD in an English-speaking country.

In 2008, while working at the Maldives Accreditation Board, Hannan received an Australian Leadership Awards Fellowship to attend Training of Trainers on Organisational Development for Improved Service Delivery, held at the Queensland University of Technology (QUT), Brisbane, Australia.

“The moment I stepped on Australian soil, I immediately fell in love with Australia,” says Hannan. “I was fascinated by the natural beauty and purity all across Australia and was impressed with how Australia is managed and governed.”

Hannan developed a good relationship with QUT officials, which paved the way for him to learn about Australia Awards Scholarships. He started gathering more information and applied for a Scholarship in 2009. He worked hard towards submitting an application; to facilitate a pathway to study for a PhD in Australia, he began applying for PhD placements and contacted suitable and willing PhD supervisors at QUT. He was successful in receiving an Australia Awards Scholarship to pursue a Doctor of Philosophy in Education at QUT in 2010.

To gain the most out of his Australian experience, Hannan lived in the suburbs, which gave him the chance to interact with the local communities and get a real experience of living in Australia. The fact that he was pursuing a PhD meant that he did not have classes to attend; however, he regularly interacted with other PhD colleagues and faculty staff. He formed a close relationship with his Principal Supervisor, Professor Hitendra Pillay, as well as his Associate Supervisor, Peter Hudson (now at Southern Cross University), with whom he still maintains a professional relationship, in addition to other staff of the International Projects Unit of QUT.

Upon returning to the Maldives after obtaining his PhD, Hannan joined the Technical and Vocational Education and Training Authority of the Maldives, as well as the Maldives Qualification Authority, where he is currently the CEO—a post equivalent to a State Minister level.

“Following my experience in Australia, I have improved and established myself as a multi-skilled professional in certain fields, in addition to being an expert in higher education quality assurance, in which I did my PhD in Australia,” Hannan says.

Since his return from Australia in 2014, Hannan has been able to make a positive contribution in the fields of higher education quality assurance and journalism. His influence and knowledge in higher education quality assurance have been vital to carry out the responsibilities of his role at the Maldives Qualification Authority. Hannan has developed guidelines for an institutional audit and is also currently trying to strengthen the program accreditation process. He also aims to rectify quality issues and loopholes that have been created in the higher education provision system. 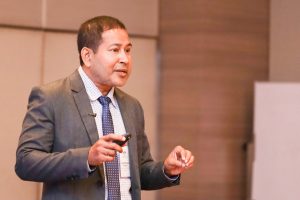 Hannan has also become a Chartered Linguist, and the only Maldivian member of the Chartered Institute of Linguists, UK. Based on this achievement, he has established himself as a linguist and a translator specialising in English, Arabic and Dhivehi, and has undertaken a number of translation projects.

In addition, Hannan was conferred with a medal by the President of Maldives in 2015 for achieving the highest academic qualification in the Maldives National Qualifications Framework. He also holds a Master of Arts in International Education, Educational Assessment, Evaluation and Research from the University of Sussex, UK, and a Bachelor of Education in English Language and Literature from Al-Azhar University, Egypt.

Hannan has also established himself as a current affairs analyst in the Maldives and appears on a weekly live TV program called World on local channel VTV, providing analysis of pressing world affairs issues. Hannan has been involved in journalism as a freelancer since around 2000, writing in magazines and newspapers; he has also been on the editorial boards of several local magazines (such as Adduvas weekly and Galan weekly). Even currently, he is an editor and writer for the Maldives Business Standard, which is the only online business newspaper in the Maldives, published in both Dhivehi and English.

Buoyed by the knowledge and experience he gained in Australia, Hannan has been supervising Master’s degree students on their dissertations at Villa College as a visiting lecturer. He also teaches Translation and Interpretation as a subject at the Maldives National University.

Hannan has published a journal paper titled ‘Challenges in Regulating Quality Assurance in Higher Education in Small States: A Case Study of the Maldives’ in the International Journal of Social Research and Innovation, Vol 2 No 1 (2018).

Hannan notes, “I am encouraged to be so active in many fields because of the confidence I gained from Australia.”