Saeeda Umar, Australia Awards alumna, was recently appointed as the Chair of the Bank of Maldives, the leading financial public limited company with majority ownership held by the Government of the Maldives.

Saeeda, the second woman to hold this position at the Bank of Maldives, provides her expertise to a large proportion of Maldivians and the corporate sector across the country. Her role is mainly to oversee the overall strategic direction of the Bank and ensure that the governance framework of the Bank remains robust and effective.

Apart from the career progressions since completing her Australia Awards Scholarship, Saeeda considers her biggest achievement to be her contributions to nation-building work for the Maldives, to impact on peoples’ lives positively. 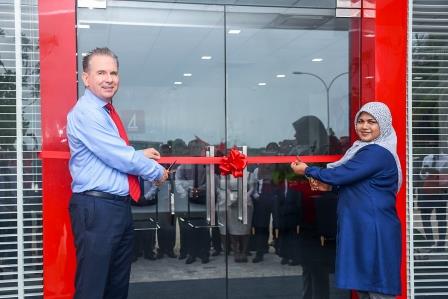 Along with her responsibilities as the Chair of Bank of Maldives, she is a Policy Consultant to the Ministry of Economic Development, where she provides her professional opinion and advice, with extensive contributions to the implementation of trade development projects steered by the Government. In this regard, Saeeda has been extremely active in: trade negotiations, resource mobilisation for trade sector development, and the implementation of programs to improve the overall trade facilitation environment in the country.

Since her entry into the workforce in 1997, Saeeda has been working in both the private and public sectors. She began working for the Ministry of Economic Development as a national consultant to support trade sector development in 2009.

In 2013, Saeeda shifted her focus more onto the development field, starting work with the United Nations Development Program’s (UNDP) Country Office in the Maldives to work in both the Poverty Reduction and Governance portfolios.

Saeeda speaks of her time in Australia as a positive, enriching and fulfilling experience.  She enjoyed living in her new setting and found Australians to be good-natured and easy-going people. The most wonderful experience for her was that she got to stay with an Australian family for the duration of her studies.

“It was an opportunity not only to update my knowledge and skills, but an opportunity to get to know a lot more about Australia, Australian people and other nationalities. To this day I cherish the good memories I had in Australia”, she recalls with fondness.

Having established a successful career and secured successful roles in both the financial and trade sectors to date, Saeeda acknowledges that Australia Awards was instrumental in enabling her to reach her career goals.

“The knowledge, skills and values acquired from the study program enabled me to work confidently side by side with male counter parts in a traditionally very male-dominated sector”

Saeeda attributes her success to the skills she learned through the Master’s program as having facilitated her to take up more challenging leadership positions and contribute to the nation’s development in various capacities.

At this point in her career, Saeeda is keen to use her years of experience as a practitioner in the trade sector to empower and effect positive change in the community. She plans to shift to the intellectual arena, engaging in policy research and community dialogue, advocating for institutional reform.

Saeeda believes that Australia Awards has contributed immensely to the development of the Maldives. She notes, in particular, the success of the program in enhancing the human capacity of the Maldives, which has led to the creation of a talent pool in many professions essential for a developing economy.

“The fact that many graduates of Australia Awards are in key leadership positions in the country is testament to the scheme’s great contributions to nation building work” says Saeeda.

Her advice for future scholars is to strive and persevere to achieve their goals while also engaging with past alumni and scholars to learn from their experiences.

“Contribute constructively to bring into effect positive change in the communities we live in, whether locally or abroad. Together, as a community we can achieve much more”