Thoiba Saeedh: A social anthropologist making a difference in the Maldives

Australia Awards alumna Thoiba Saeedh is a Social and Cultural Anthropologist in the Maldives. Since September 2019, she has sat on the Senate Board of the Islamic University of Maldives, having been appointed by the Minister of Higher Education, HE Ibrahim Hassan.

Thoiba has always been invested in social justice issues and engaged in volunteer projects in the Maldives. After her A-levels, she wanted to further her education in the social sciences. With limited opportunities in her country of origin to pursue higher education in that field, she began exploring opportunities overseas. Due to her financial situation, studying overseas required a fully-funded scholarship, which meant going through rigorous and highly competitive application processes. In 2013, Thoiba received an Australia Awards Scholarship, through which she began a Bachelor of Arts in Sociology at the University of Melbourne. During her studies, however, the student counsellor at the university recommended that she also consider courses in the field of anthropology.

“Australia was a stepping stone in many ways,” Thoiba says. “I have always wanted a career in academia and the social sciences. When I went to Australia, my interests were in sociology and political science. I had never heard of anthropology prior to my Australia Awards experience. I still remember sitting for my first lecture in anthropology and thinking, ‘I’ve found my calling’. It was at that moment I decided that anthropology was the field and discipline I would pursue.”

Recalling her first visit to the University of Melbourne, Thoiba remembers seeing the university sign and being overwhelmed by the opportunity she had received—an opportunity for which she remains extremely thankful, especially given the competitive nature of the selection process. Travelling to Melbourne in 2013 was Thoiba’s first journey outside of the South Asia region. Despite the challenges of being in a new and unfamiliar country, she remains grateful for the wide-ranging academic possibilities that were available to her in Australia. She maximised the opportunity by taking a wide variety of courses, including political science, international relations, psychology and criminology.

Her commitment to contribute to her country was evident in how she connected her coursework to her home: she focused several papers she submitted on political, social and youth issues prevalent in the Maldives context at the time. In addition, she worked on papers where she explored human rights issues concerning high profile detainees in prison settings such as the Guantanamo Bay detention camp. She recalls working late into the night and getting lost in reading transcripts and reports she found on the subject. Her courses provided her with a critical thinking on world politics, gender issues and criminal justice. This exposure and knowledge expanded her future professional horizons and career path.

A highlight of Thoiba’s time in Australia was interning in the office of Maria Vamvakinou, Australia’s Federal Member of Parliament for Calwell. This gave her the opportunity to initiate and execute an applied theatre workshop to raise awareness of the critical human rights issue of forced marriage in Australia. Thoiba organised and led a ‘Theatre of the Oppressed’ workshop in association with Australian Catholic Religious Against Trafficking in Humans (ACRATH) and Roxburgh College in Melbourne, and produced an analytical report on the effectiveness of existing legislation on forced marriage in Australia. This report employed a cross-cultural approach, examined a broad range of scholarly work on the topic, and outlined key issues, various approaches and best practices in dealing with victims/families. She also assisted in drafting a speech delivered in Parliament by Ms Vamvakinou MP, highlighting concerns about forced marriage as it affects immigrant communities in Australia. During this internship, she received the opportunity to attend a parliamentary session in Canberra. 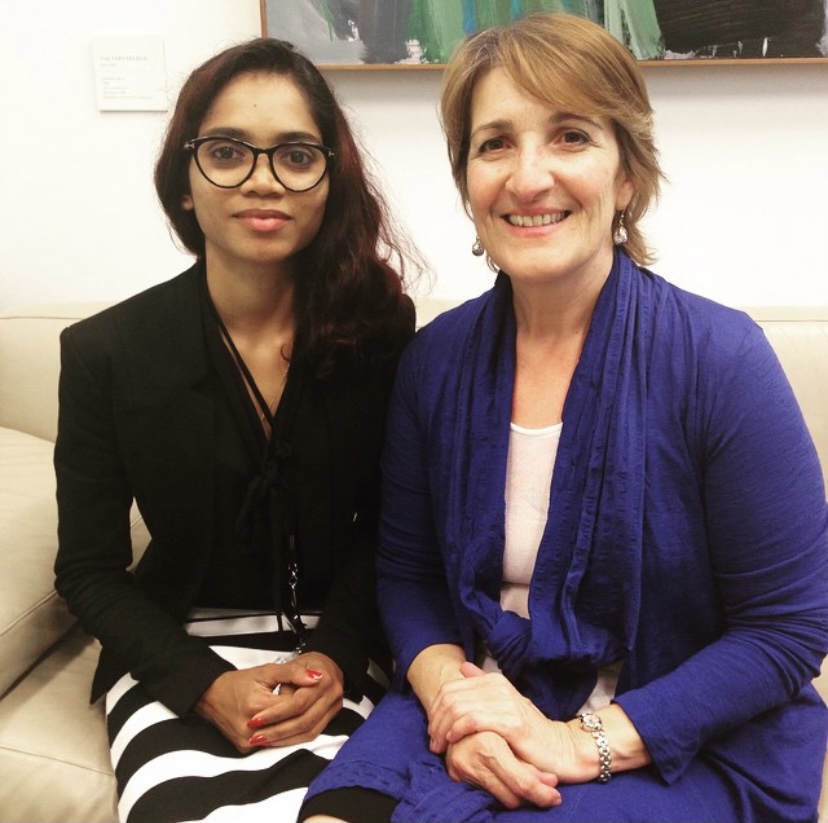 “Australia was a home away from home. Everyone was so lovely and friendly,” Thoiba says. “You could express an opinion and have a constructive and productive discussion, agree to disagree and conclude on a positive note.”

Her time in Australia created many fond memories. Thoiba was a part of a close Australia Awards cohort who organised picnics and barbecues together during their time in Australia and who remain in touch with each other to this day—a testimony to the strength of their friendship, which has survived time and distance. Although she was focused on her studies and travelled back home to the Maldives during her breaks, Thoiba managed to see some of Australia beyond Melbourne towards the end of her study. Travelling by train, she took a trip alone to Brisbane and Sydney with one small suitcase in hand. Solo travel, something she had never done before, was daunting, especially in a foreign country. But having taken that trip, Thoiba now treasures memories of seeing the Blue Mountains and Sydney Opera House.

In 2015, she completed her Bachelor of Arts with a double major in anthropology and sociology. 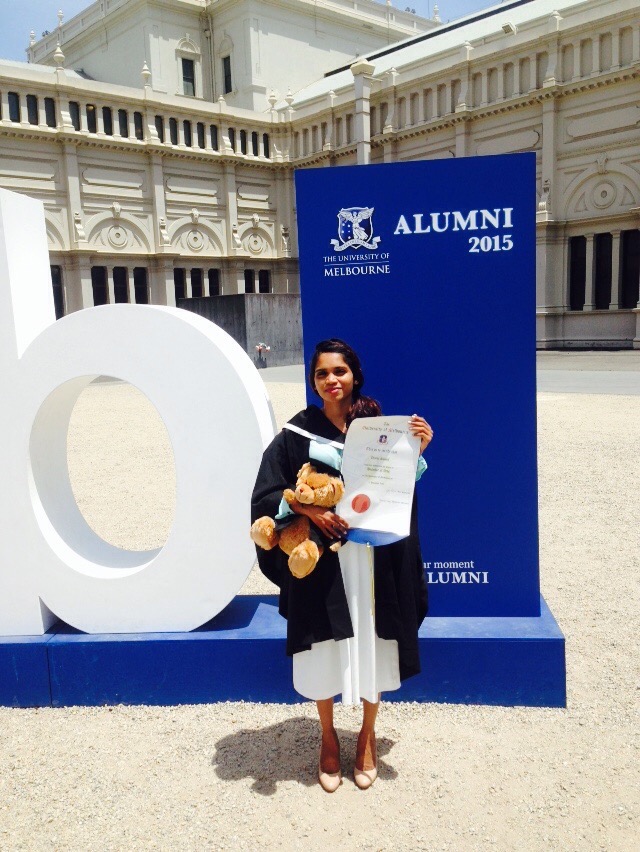 Thoiba during her graduation ceremony at University of Melbourne

After returning from Australia, Thoiba worked for the Maldives Red Crescent and Maldives Sports Corporation Ltd. She engages with Maldives Australia Alumni and participates in activities the alumni association organises. In 2017, she received partial funding from the Australia Awards Innovation Challenge for a project on the root causes of radicalisation for women and youth. This entailed a 3-month ethnographic field research that included travel to Kaafu, Seenu and Gaaf Alifu atolls in the Maldives, giving her further insight into the nuances and complexities of island living, opportunities and social life. Her study highlighted themes of identity, politics and the impacts of modernity. This research was presented at the Regional Alumni Workshop in Dhaka, Bangladesh, in 2017 as crucial data in shaping policy interventions to strengthen the role of women and youth in community building.

In 2018, Thoiba completed a Master of Science by Research in Social Anthropology at the University of Edinburgh, United Kingdom. While undertaking her degree, she took the opportunity to tutor undergraduate social anthropology students at the university.

The skills and knowledge she gained from her Australia Awards experience remain very relevant to Thoiba’s career. She joined the United Nations Office on Drugs and Crime (UNODC) in early 2020, as the Programme Coordinator in the Maldives Programme Office, in the midst of the COVID-19 pandemic. In this role, she helped to establish a UNODC office in the Maldives; implement projects in the areas of criminal justice, counter-terrorism and prison reform; and advocate at high levels for the Nelson Mandela Rules.

She has now left her post at UNODC and is currently working at the Australian High Commission – Sri Lanka & Maldives as a consultant Research and Information Officer, while pursuing her PhD in Social and Cultural Anthropology. She remains committed to carrying out meaningful work that makes a lasting contribution to vulnerable communities in her country.

“I want to give back to the community by giving a voice to the most vulnerable and marginalised, especially youth and women from the remote islands. I have always been interested in addressing the problem of drugs and crime as it relates to youth and, importantly, for women, who are disproportionately affected within the justice system. Through my research work, I want to be able to shed some light on the nuances of this country, on its diverse socio-cultural elements,” she says. “I strongly believe that when you build and empower the youth and women in a community, you create a solid foundation for the future, and that is the biggest investment we can make today.”